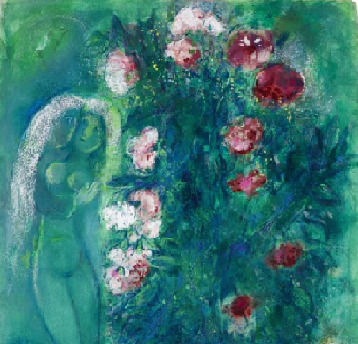 With his unmistakable pictorial language and the beauty of his colours, Marc Chagall (1887 to 1985) left his mark on 20th century art as one of the very great masters of modernism. From 1 May to 31 October, the Lindau Art Museum is showing an extraordinary exhibition of the painter's work entitled "Marc Chagall - Paradisiacal Gardens".

Pictures beyond time and space
With his unmistakable pictorial language and the beauty of his colours, the painter-poet Marc Chagall (1887 - 1985) has left his mark on the art of the 20th century as one of the very great masters of modernism. Seemingly freed from space and time, his dreamy and colourful compositions unfold a magic that hardly anyone can escape.
Chagall allows his pictorial motifs, created from sweeping lines and graceful forms, to float through luminous color spaces, conveying an impression of tenderness, lightness, and hopeful, winged poetry. The pictures assembled in the Lindau show depict the lush vegetation of southern countries and flowers in all colors. The works illustrate Chagall's deeply felt longing for a life in close harmony with nature.

Longing for Paradise
In his long and eventful life, Chagall drew many elements of his art from memories of his distant Russian homeland and from life in the south of France. Above all, the Mediterranean world of the Côte d' Azur has fascinated Chagall since his return from exile in the United States in 1948. The deep blue of the sea and the night sky determine the artist's color palette as much as the light of the south.
He processed the grief for his great love Bella, who had died at an early age, in visionary paintings that tell of his search for the lost paradise. In the Lindau exhibition, colourful bouquets of love couples illustrate Chagall's mastery as a colourist and the refreshment of his treasure trove of motifs through new, exhilarating experiences of deep love and rich nature.

Picture Stories - The Art of Storytelling
Throughout the ages, people have told stories to each other for edification. Many of Chagall's compositions also read like picture stories with great narrative power. The Lindau show therefore focuses on Chagall's illustrations of the ancient love story "Daphnis and Chloe" by the Greek author Longos. In this famous cycle of 42 sheets, Chagall celebrates a veritable feast of colour and fantasy. He transports the viewer to the fairy-tale setting of an Arcadian nature in which the love of two shepherd children awakens.
Chagall, who travelled to Greece especially to trace the story in the southern light and the paradisiacal island landscape of the Aegean, thus created one of the most important graphic cycles of the 20th century. With the extraordinary artistic and technical quality of the lithographs, he revolutionized the high art of lithography.
The exhibition illuminates the creative period between 1950-1970 and shows how Chagall, even as a mature artist, experimented with many different techniques in a virtuoso manner, thus enriching his great oeuvre.
As curator, Prof. Dr. Roland Doschka devotes his entire passion to the Lindau show.
1 May to 31 October 2021